These statistics are just some examples from over 40 years of scientific research showing the impact of work organization and work stressors, on the health and well-being of working people.

Work can make us sick.

10 to 20% of all causes of CVD deaths among the working age populations can be attributed to work. (Tokyo Declaration via IJOMEH 1/2015)

“Job Strain,” where workers have little control over their job, but who are under high pressure to perform, accounts for 17 per cent of depression in working women and 13 per cent in working men. (LaMontagne, T et al. Estimating the economic benefits of eliminating job strain as a risk factor for depression. Melbourne: Victorian Health Promotion Foundation, 2010)

People putting in a lot of effort at work while receiving inadequate rewards, are twice as likely to suffer from CVD than other workers. (Siegrist, Psychoneuroendocrinology, 2005)

Those reporting higher levels of unfairness at work were more likely to experience a heart attack. (De Vogli, Journal of Epidemiology & Community Health, 2007)

Employees reporting a high sense of justice in their workplaces had a 45 percent lower risk of dying from CVD. (Elovainio et al, Journal of Psychosomatic Research, 2006)

Employees at downsizing firms have been found to get sick at a rate more than two times as high as workers who feel secure in their jobs. (Goh et al, Behavioral Science & Policy, 2015)

“Karoshi” is a term in Japan that recognizes the problem of sudden death from long hours of over-demanding work. (Shimomitsu and Odagiri from: Schnall, Belkic, Landsbergis, et al. The Workplace and Cardiovascular Disease, 2000)

Those with high levels of work stress (job strain, effort-reward imbalance) are twice as likely to think about committing suicide than those with no or limited amounts of work stress. (Loerbroks et al, Journal of Psychosomatic Research, 2016)

A study from Whitehall compared those working 40 hours per week at most, with those working more than 55 hours per week found lower scores in the vocabulary test at both baseline and follow-up for those working 55 hours a week or more. As well, long working hours predicted decline in performance on the reasoning test. (Virtanen et al, American Journal of Epidemiology, 2009)

Working conditions are getting worse.

By 2020, over 40% of Americans will work in precarious jobs—those with no job security or benefits (independent contractors) or as part of the “gig” economy. (Newsweek, 2015)

More than half of American workers (52%) left vacation time unused in 2018. This added up to 705 million unused vacation days in 2017. Workers cited ‘fear looking replaceable’ (61%) as the greatest challenge, ‘my workload is too heavy’ (56%) as the second greatest challenge, followed by ‘lack of coverage at work’ (56%) and several others including ‘the cost of travel’ (53%). (Project: Time Off’s State of American Vacation 2018)

What is work stress costing us?

As many as 10 different work stressors (including high work demands, having no power at work (low control), long work hours, shift work, job insecurity, work-family conflict, workplace injustice, etc.) have been related to poor mental (depression) and physical health (heart disease), and can shorten your life by up to 3 years! (Pfeffer, J. Dying for a Paycheck. Harper Business, 2018) (Huffington Post, 2015)

The direct and indirect costs of work-related stress to companies (including increased healthcare premiums, and the added costs to employers from increased absenteeism/sick leave, disability management, diminished productivity at work (presenteeism), and employee turnover) is estimated in the hundreds of billions. (Jauregui and Schnall. Work, Psychosocial Stressors and the Bottom Line. In: Unhealthy Work: Causes, Consequences, Cures. Baywood, 2009)

The Healthy Work Campaign has also created #HealthyWork infographics to distill and visualize our most important #healthywork statistics for you to share easily in your work, your organization and your community. You are welcome to share these infographics on social media, in your wellness programs, and at work. 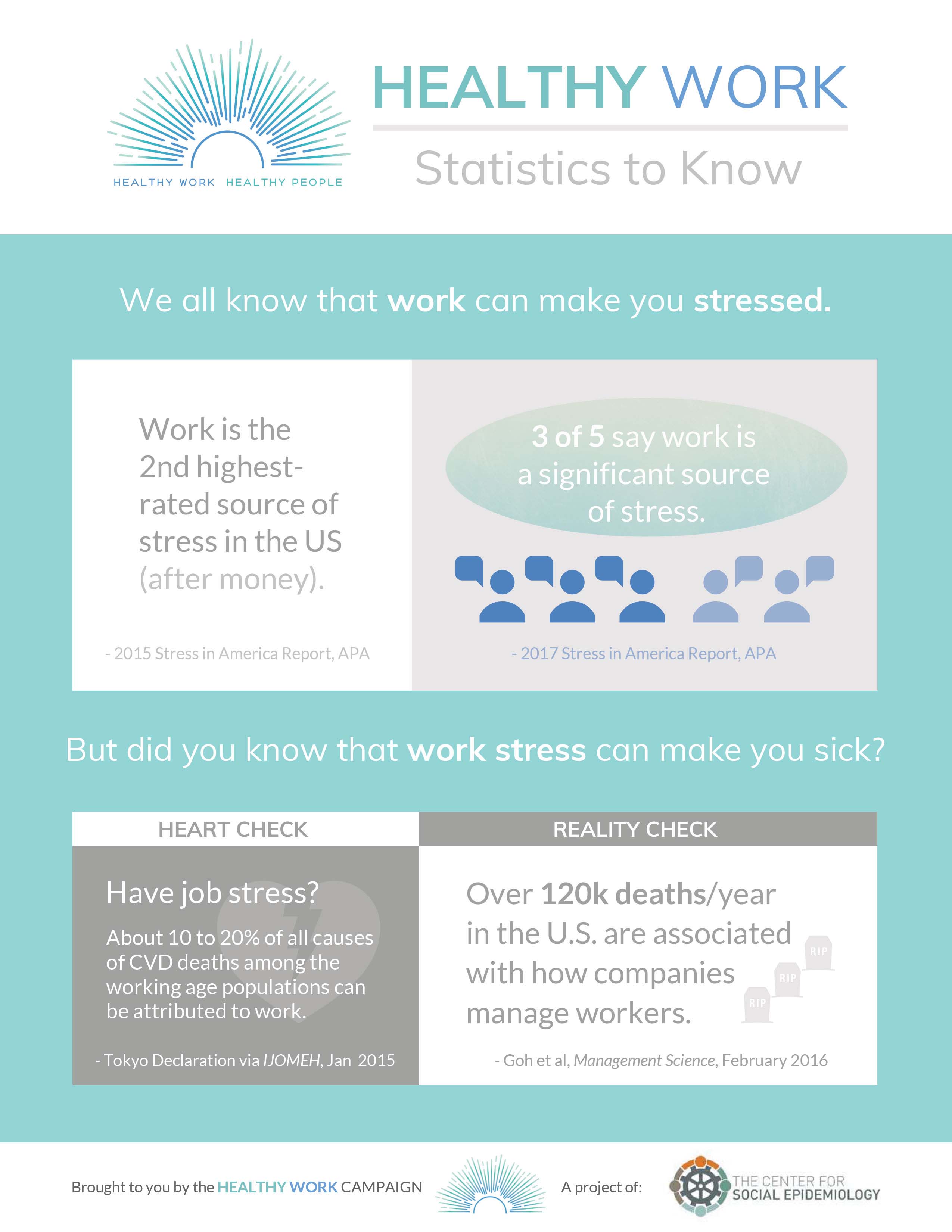 Stats to Know:
The Burden of Burnout 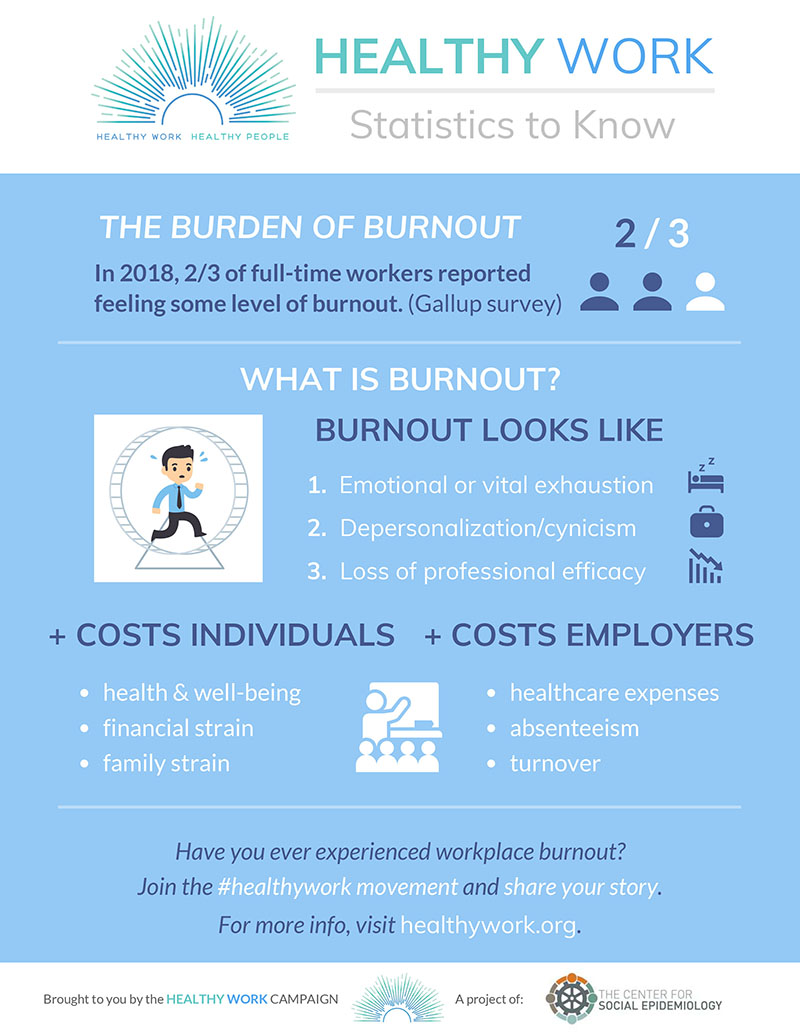 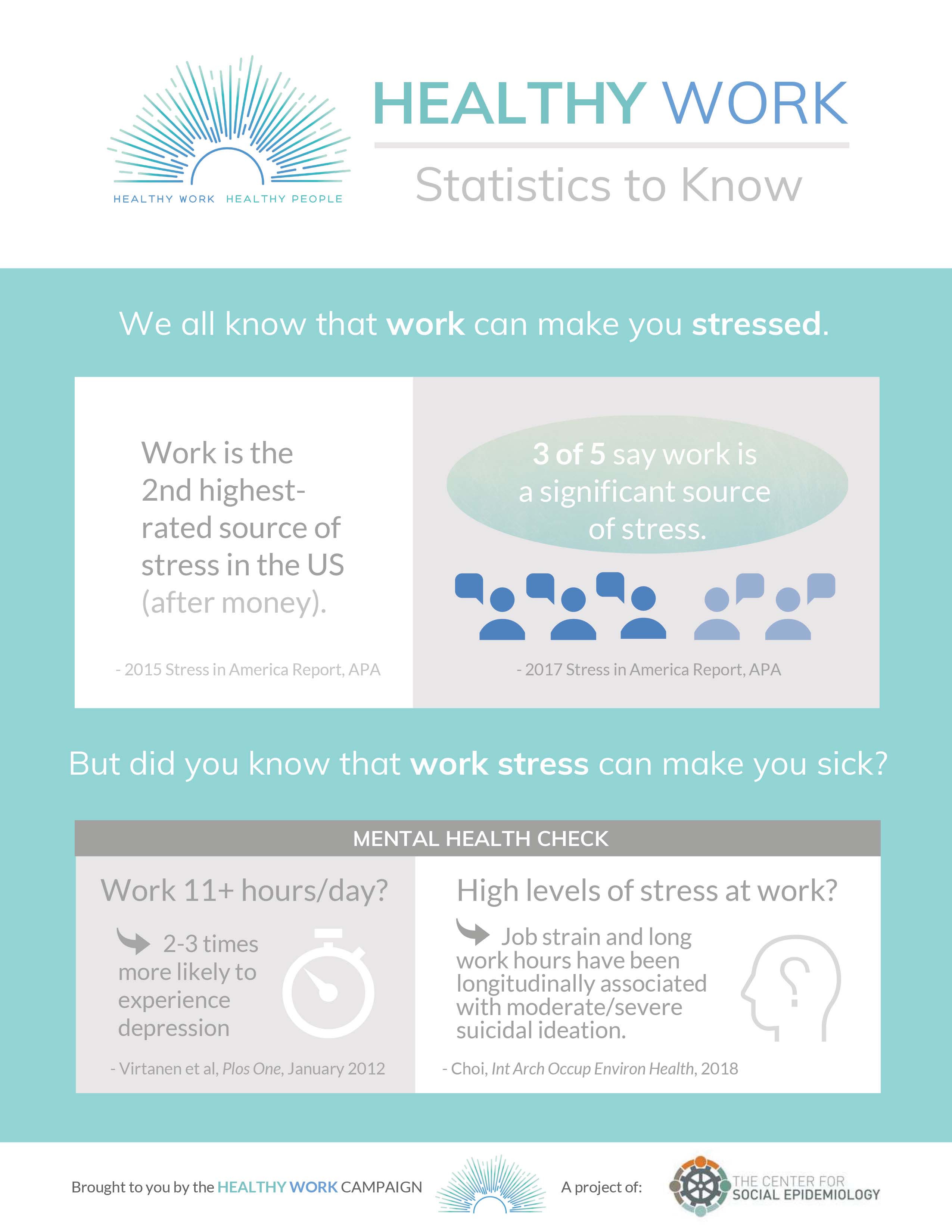 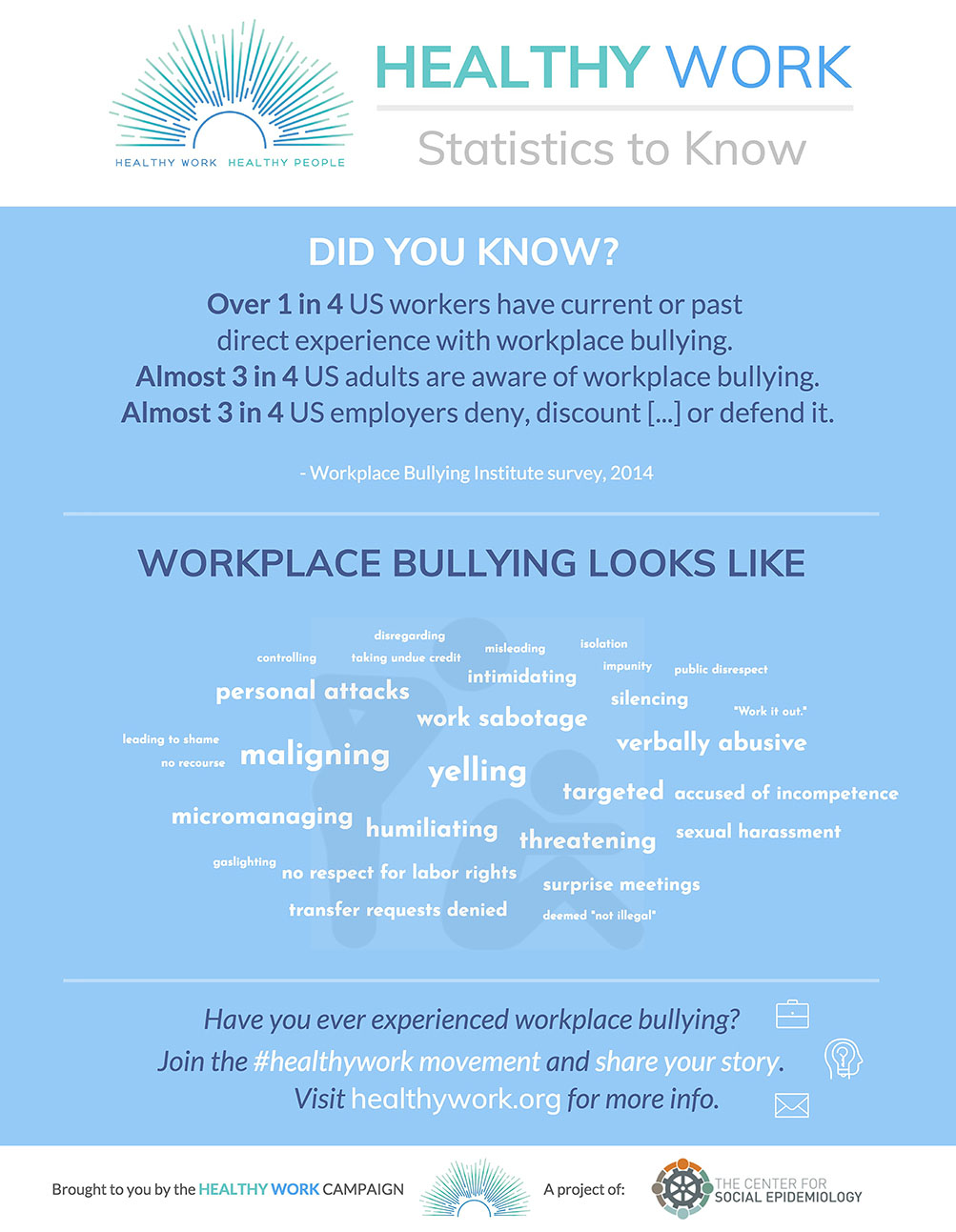